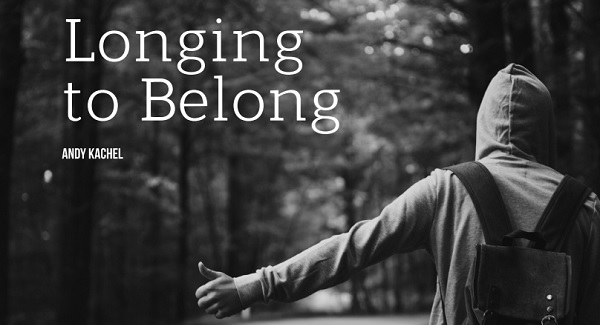 The road I have walked has not always been easy. When I turned nineteen, my parents decided to uproot and move from Pennsylvania to Colorado. At the time, I was partway through my freshman year of college, and it was immediately clear I should not follow them. Plenty of families move, sure, but my family tends to gravitate toward isolation. The move would ultimately end up putting them far away from family and friends—and lead to my brother running away from home and my parents’ divorce. However, before any of that happened, they made the move. Neither of my parents went to college, nor could they understand the rigors of what I was about to undertake. They made it clear they would not be able to help me navigate college. So, I took the opportunity to strike out on my own and do things differently from them. Boy, was I in for a rude awakening.

Almost immediately I came to realize how different my situation was from my peers. While other nineteen-year-olds were settling into school clubs or deciding who to date or who not to date, I was trying to understand the complexities of borrowing money to buy a used car. While most of my peers were complaining about our school’s meal plan, I was trying to understand how to make a budget and buy groceries; I’m fairly certain my lunches consisted of Cheetos and Oreo cookies for the first month. I discovered that “the baseline”—what most people come to expect from their parents such as food, transportation, or financial support—was my ultimate goal.

Slowly, year after year, I came closer to my goal of sustainability. However, my college years were often fraught with great anxiety and anger. I had the means to buy food for myself and pay my bills. This ability quickly became an idol of security and more about existing in a glass castle than anything else. All the while, I told myself that if I had only been given the opportunity to start out at “the baseline” then that would have been to my advantage. At the baseline, I might have been able to join interesting clubs or be free to play football with the guys after class. Instead, I went to class in the morning, walked to my job in our college town around noon, walked back to college for afternoon classes, and then walked back to work to help close up. A mindset of victimhood allowed a deep, unchecked bitterness to creep into my existence.

The one thing I was attempting to prevent—the isolation I mentioned earlier that my family had chosen—was the glass castle in which I found myself existing. I made little effort to shape my time in college around friendships or belonging. Everything became about hard work and the need to survive. The Catholic scholar John O’Donohue, in his book Eternal Echoes writes,

We bind our lives up in solid chains of forced connections that block and fixate us. This silences the voices within us that are always urging us to change and become free. Our sense of uncertainty and our need for security nail our world down. We pretend that we live in a ready-made house of belonging. We walk through its halls, open its doors, and shelter inside its walls as if it were a fixed house and not the invention and creation or our own thinking and imagination, a flimsy nest of belonging swinging on a light branch that tempts the unknown storms.1

And the storms blew through my life, vigorously.

My parents’ divorce started me on the path to my breaking point. Then, my boss passed away from a brain tumor and I tiptoed closer to the edge. Hoping the dust had settled, I graduated from college and immediately found that no one in my part of Eastern Pennsylvania was hiring editors or journalists. The college internship I had completed at an advertising agency didn’t pan out, and that company eventually closed. I found myself stuck working in a retail job. When nothing else seemed like it would collapse, my college romance of three years ended.

The horror writer Stephen King accurately captured the sentiment I had toward God at that moment in my life:

When his life was ruined, his family killed, his farm destroyed, Job knelt down on the ground and yelled up to the heavens, “Why god? Why me?” and the thundering voice of God answered, “There’s just something about you that pisses me off.”

In no way is this sentiment Biblically accurate; however, sometimes it’s more important to capture a certain feeling or mood to expose it as inaccurate.

What had I done to deserve any of the pain or suffering I had endured? Nothing. Did God have a grudge against me and was life somehow fixed against me? An older friend who was a widower provided a more accurate conclusion when he shared 1 Peter 4:12-13 with me:

Beloved, do not think it strange concerning the fiery trial which is to try you, as though some strange thing happened to you; but rejoice to the extent that you partake of Christ’s sufferings, that when His glory is revealed, you may also be glad with exceeding joy.2

Everything I had endured, all the pain, suffering, and the collapse was in fact normal. It just seemed abnormal when viewed through a lens of security.

Something was still missing, and the answer came to me one night in a dream. I remember eating a lot of bread before I fell asleep that night, which often gives me wild dreams. In the dream I found myself wandering aimlessly around a forest with tall trees. I saw a friend off in the distance and waved, but they couldn’t be bothered to acknowledge me, so I kept walking. Eventually I came to a tall house in the middle of the forest. What stood out most about the structure were its many windows. As I approached the house, my brother joined me and told me he wanted to tell me a story. He took my hand and walked me to the house. It became clear that in telling me his story he would also need to show me. He led me to the house and began knocking on the windows. He said, “I was all alone and no one would let me in.” He walked me to a door on the house and attempted to turn the knob. It was locked and he said, “No one could hear my cry.” My brother then walked me to another door, turned the knob, and it swung open. I remember hearing from inside the house, “You are wanted.” I woke up with tears in my eyes.

I knew then that what I wanted more than security or sustainability was to leave Pennsylvania and go to a place where I could, through action, show potential friends that they were wanted in my life, and where I too could be wanted by them. At that moment, when I viewed the harsh circumstances of my college years through a lens of purpose, God no longer seemed so antagonistic. Could it be that all along the storms and trials were meant to perfect my faith? John O’Donohue also writes, “Sometimes you are lucky and destiny wakes you up abruptly, you stumble and trip into love, or some arrow of suffering pierces your armour” [1]. How many of us would count ourselves “lucky” to have no job opportunities? And yet, there I was walking on a better road than when I had first started.

I relocated to Boston and moved in with my best friend, who had relocated from Pennsylvania to Massachusetts a few years earlier. We packed all my stuff into the back of a van, and I stayed in his second bedroom/office. Slowly, month after month, I began exploring the city and meeting people on a similar journey as me. There was nothing strange about the storms I had endured because they had endured them too. Eventually, God led me to a community house of fellow believers, located not in a forest with tall trees but in a densely populated Boston suburb. I remember sitting in their living room for the first time, when one of the roommates asked me if they could get me a glass of water. I remember drinking the cool, crisp glass of water in one big gulp, trying not to cry—You are wanted, I thought.

Andy Kachel is a writer and editor in the Boston, Massachusetts area. Outside of work, he enjoys hiking, perusing the local comic book store, spending time with his wife, and reading.