Belonging. When originally approached about this theme, I had topics in mind, some fun stories, perhaps a joke or two. But as I compose this article, none of these come to mind. All that pervades my consciousness is the loneliness and isolation I have experienced in terms of community. I reflect on the times where a smile disguised the numbing loneliness of the day and the nights where tears were my food as I pleaded with God to reveal to me where I was supposed to belong. Now, I do not mean to sound harsh or to condemn the Church, nor am I saying I have not experienced great communities. In the grey of this passing world, I have tasted the golden apples of communion with others that only comes from the Father of Lights. I am simply expressing my experiences, my pain, and my hope. My hope is in an eternal communion with the Father and a communion with others that can begin today.

My mother came to the Lord when I was about five years old, so the majority of my life I’ve known what many would view as “church,” in all of its forms and fashions. From Catholic services to Pentecostal gatherings, from black churches to white or even those services that used words like “transethnic,” from mega churches to living room gatherings, I was able to see how people of different creeds, nationalities, and races were able to worship together. And as I reflect on my childhood, I’m thankful for the diversity of experiences. Yet at the same time, I never really felt like our family found a home, at least not like everyone else. After the potlucks, the holiday services, the Halloween substitution events, one would think that I would develop a familial attachment to the church. I suppose I thought when I believed in Jesus, like really believed, that would change.

Needless to say that day finally came. When I was sixteen, the scales were removed from my eyes, and I was ready to “walk the walk” with Christ. For the first time in Christ, I felt a sense of identity belonging in him that I had never felt before. So of course, I would feel that with his people. The masses of people that smiled and worshipped together when I was a kid, I would finally be one of them. I would finally fit in the mold.

It didn’t happen. Always viewed as “the clown” or “the jester,” I felt like people never saw me or the “real me.” Sometimes it kept me up at night. “Person X” didn’t even see me or “Person Y” never asks how I’m doing. “Person Z” wants me to say the same joke, wear the same smile, and not waste their time. It didn’t help that I was emotionally closed off, so whenever someone would try to come close, I would deflect with humor. The very people God sent into my life to help, I rejected due to my stupid pride. And in retrospect, that’s exactly what it was, stupid pride. Needless to say, bitterness crept into my heart like a serpent entering a bird’s nest.

Eventually, there was a shift. In college, I was blessed with friends with the blunt force of God to see through all the jokes, to call me on my fakes, and to encourage me in my calling. I never realized how blessed I was at the time to be able to share myself with others, and for some time, I felt relieved. Like this was the communion that I’d always sought, even if at times it came in forms that were undesirable.

I honestly thought for a moment that it was the friends that changed me, and in part it was. But if we examine a farming example, even if all the environmental conditions are right, a seed still needs to be planted for it to germinate. You can have the most favorable rain, the optimum temperature, and the perfect amount of sun, but no seed means no growth. I didn’t realize during those times of loneliness, the tear-filled evenings, those times I was questioning if anyone saw me. Someone did. God was always watching, and he planted seeds of intimacy and communion with him that could never be uprooted. And, it was in that communion that I had with him, that I was able to commune with others. It was in drinking from his well, that as his child I was able to become a wellspring of community for others.

Now, does this mean that I no longer experience loneliness or isolation? No, but it does mean when no one is around I have access to an eternal communion. See, I believe our communion, our belonging first has to be found in Christ; then, and only then, can we see it in other places (See 1 John 1:1-3). 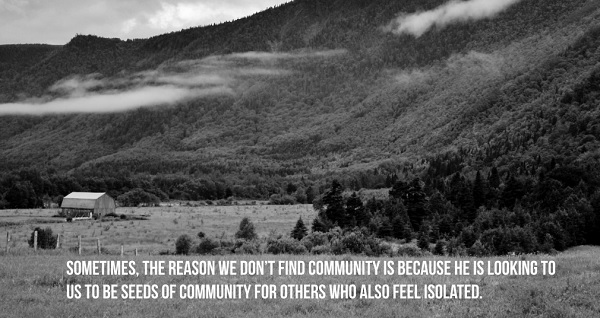 This does not mean that we don’t seek out places of community, but we have to ask God what he desires for us in this season. Sometimes, the reason we don’t find community is because he is looking to us to be seeds of community for others who also feel isolated.

I know how it feels to be alone, so if that’s you, know that God is with you and he’s planting seeds of communion within you. If that’s not you and you have a community, give thanks to God, for he has given you something that truly comes from above.

By the way, there is more to the quote by Dag Hammarskjöld from the beginning of this article:

“For him who has responded to the call of the Way of Possibility, loneliness may be obligatory. Such loneliness, it is true, may lead to a communion closer and deeper than any achieved by the union of two bodies.”

Brandon Morgan is currently a graduate student at Tufts studying food policy and applied nutrition. He also teaches nutrition education at a GED program in the downtown Boston area. He enjoys reading, writing, and climbing.